Preview all songs and Purchase at:   iTunes

Listening and engaging with this music will activate your body’s natural healing mechanisms which can improve:

And this is just naming a few! You may wonder how this music is able to improve such a wide variety of diseases, and the answer is quite simple.  When you improve the balance of your autonomic nervous system, you are making changes to the “master system” that regulates the activity of other major systems in the body.

INSTRUCTIONS FOR THE ALBUM “MUSIC FOR BREATH CONTROL AND MEDITATION” BY ARCOSPHERE:  Start with the first song, which is set at 10 breaths per minute (bpm). Perform diaphragmatic or belly breathing (see below) and inhale or exhale at the sound of the chime. Breathing should be relaxed and not forced. If it’s difficult to perform seated, then practice lying down.  Gradually progress to the next song of slower pace, as long as your breathing remains relaxed. Listen to the songs independently or the entire album at one setting for a gradual lowering of breath pace.  At some point in each song, the chimes will disappear, but continue to breathe along with the music. The music has been specially designed to facilitate breathing at a set pace, even without the chimes.  This is one of the many things that make this music unique. Download the entire album to get the best experience and greatest effect.

The Science behind the Music: Music for Breath Control and Meditation engages the listener with soulful tunes that help develop awareness and control of the breath.  Breath awareness and control are not only fundamental skills for meditation, but are also effective strategies to deal with acute exacerbations of pain, stress, and anxiety.

Diaphragmatic breathing or belly breathing (i.e. belly rises with inhale; falls with exhale; minimal chest movement), is a known control mechanism for effectively reducing sympathetic nervous system activity. Paced diaphragmatic breathing is also another powerful mechanism for regulating the autonomic nervous system.  The average respiration rate for humans is anywhere from 12 to 16 breaths per minute. Anything less than 10 breaths per minute will have some impact on lowering sympathetic nervous system activity.  At a certain pace when diaphragmatic breathing becomes relaxed, consistent, slow, and deep-  heart rate and respiration depth will synchronize or “resonate,” producing heart rate and respiration “coherence.” When this happens, your heart essentially “recognizes” the pace of your breath and starts to beat along with it in a consistent pattern (refer to pictures below).  Practicing breathing at this pace can increase Heart Rate Variability (HRV) or Respiratory Sinus Arrhythmia (RSA).  A higher HRV or RSA reflects a more relaxed autonomic nervous system (less sympathetic tone).  A lower HRV/RSA  has been clinically correlated with illness, chronic stress, and an increased risk for the development of future, chronic diseases.

The benefits of practicing paced diaphragmatic breathing are immense. When one learns how to control the autonomic nervous system, one can then influence the activity of the cardiovascular, digestive, immune, endocrine, and limbic systems.  Through the power of breath and music, this album will help you learn how to take control of your own health and wellness!

Creators: Jim Fabricatore of Arcosphere created the music along with technical guidance from Elmer Ligh. Elmer is a physical therapist who uses biofeedback and breath pacing to help veterans suffering from chronic pain and stress. This album is a fusion of their work, designed with the specific goal of delivering the healing powers of breath and music.

Screen shot of a biofeedback session, showing changes in respiration, heart rate, respiration rate, and heart rate/respiration coherence (listed from top to bottom). The first column, on the left, represents baseline breathing without pacing. Notice how the heart rate, in red, is ill defined when compared to the last column on the right (which depicts paced breathing at 6 breaths per minute, while listening to the music). Also notice how the heart and respiration rate coherence (orange line at the bottom) is much lower than the coherence in the last column, where breathing is at 6 breaths per minute.

This is a zoomed in shot of the first column, showing baseline breathing without pacing. When compared to the last column (see picture below), notice how the breathing (top line in blue) is shallow and rapid (averaging 17 breaths per minute), with slight pauses or “holds” at the end of exhalation. Also, notice the heart rate (second line in red) is relatively “flat” showing little variability in rate, which reflects higher sympathetic tone. The third line (also in blue) moves up and down and reflects a varying rate or speed of breath, despite the individual sitting still and at rest. Finally, the heart rate/respiration rate coherence (orange line at the bottom), has a low score which reflects poor synchronicity between the cardiovascular and respiratory systems.

This is a zoomed in shot of the last column, where breathing is at 6 breaths per minute, when listening to the music. Compared to baseline breathing without pacing, notice how the breathing (top line in blue) is much larger in volume, symmetrical, and without any extended pauses or “holds” at the end of exhalation. Also, notice the heart rate (second line in red) is no longer “flat” and shows an increase in variability, which reflects a decrease in sympathetic tone. The third line (also in blue) moves up and down much less, and its flatness reflects a more constant breath rate. Finally, the much higher score of the heart rate/respiration rate coherence (orange line at the bottom), reflects an improved synchronicity between the cardiovascular and respiratory systems.

This is a screen shot showing in “real-time” the heart rate (line in red); the respiration (line in blue); and any relationship (coherence) between the two, during the baseline, non-paced breathing.  Notice the poor variability or “flatness” of the heart rate, which reflects increased sympathetic tone.  Also notice the absence of coherence, or any synchronicity between the heart and breath. 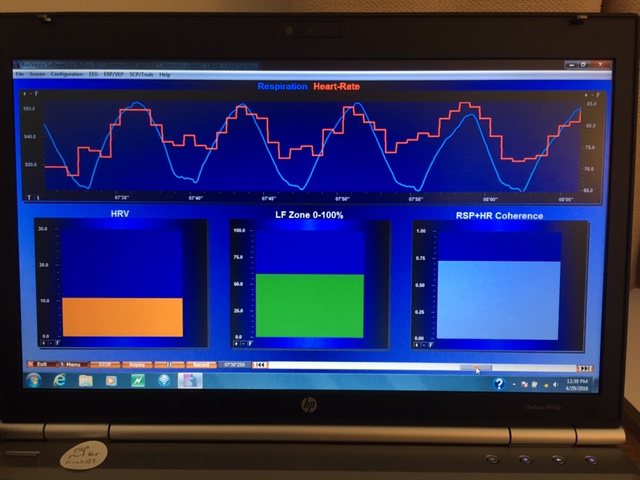 This is a screen shot showing in “real-time” the heart rate (line in red); the respiration (line in blue); and any relationship (coherence) between the two, during the 6 breath per minute paced breathing when listening to the music.  Notice the significant change in heart rate variability, going from a relatively flat red line, to one that rises and falls with the breath. This increase in variability indicates a decrease in sympathetic tone. Also notice the significant increase in coherence, or synchronicity, between the heart and breath.